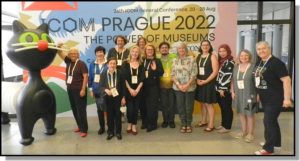 The new board elected in August 2022,
during the ICOM Prague General Conference

As there were not enough candidates for the number of positions to be filled, there was no vote but recognition by acclamation of the new Board at the off-site meeting of the General Conference in Prague 2022:

Apart from the election, 3 CECA members were co-opted: